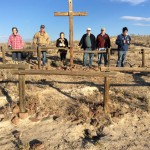 Members of the Board of the California Trail Interpretive Center who camped at Gravelly Ford October 3-4, 2015 are shown here above the fenced graveyard of unknown emigrants at Gravelly Ford near present-day trail marker C-44 on the Horseshoe Ranch. The group enjoyed Dutch oven meals, conversation, and relaxation in Nevada’s open spaces during the  [read more…] 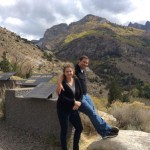 Sunday, October 4, I met Katelyn and Kendall Christensen at the Mariott Hotel for a tour of Elko. After Dr. Christensen finished meeting with the hospital, the Northeastern Nevada Regional Medical Center, the three checked out the black-box show at the Western Folklife Center, were captivated by the California Trail Interpretive Center before driving out  [read more…]