You are here: Home / John's Journal / CTIC Board Members Camping at Gravelly Ford 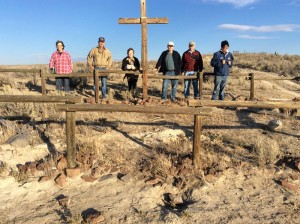 Members of the Board of the California Trail Interpretive Center who camped at Gravelly Ford October 3-4, 2015 are shown here above the fenced graveyard of unknown emigrants at Gravelly Ford near present-day trail marker C-44 on the Horseshoe Ranch. The group enjoyed Dutch oven meals, conversation, and relaxation in Nevada’s open spaces during the weekend.

The Bidwell-Barleson Party of 1841 were the first emigrants to travel overland to California along the Humboldt River…Trail descriptions are very general which is understandable considering their haggard condition and having no idea of where they were or what to expect. It appears from James John’s diary account, they actually navigated the rugged Palisade Canyon to reach Gravelly Ford, Sept 27, 1841.