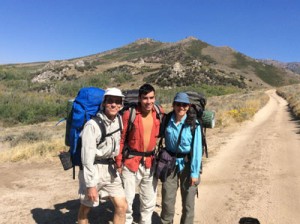 I shuttled 3 hikers, Steve, EM, and son Christopher, to Harrison Pass for the Ruby Crest Trail hike September 9, 2015. They camped in the campground and enjoyed an Island-Lake hike the day before I met them at the turnaround for the big hike.

Janice and I have taken that 2 mile hike numerous times; it’s one of the best for flowers since most of the trail is sun-side of the mountain. Roses, daisies, Bog orchid, St. John’s Wort, Death Camus, Waterleaf, Goldenrod, numerous Penstemon, Umbels, Buckwheat, Indian Paintbrush, Mountain Spray, Geranium…. I could go on and on, but you get the point. Flowers line the trail all the way up and cover the hills.

We’ve hiked much of the Rubies, always hoping to see one of the famous Himalayan Partridge that were imported to the Rubies and are found today in only the Himalayan mountains AND the RUBY MOUNTAINS! But we never spotted the little devils because much of the time they perch on the highest, most inaccessible peaks in these mountains. When they spot a hiker approaching they fly to the next farthest peak, out of reach.

These three hikers, though, saw a FLOCK of Partridge! A complete FLOCK!! Totally unfair of those birds. They know I’ve been aching to spot one of them for years, and they fly en masse over someone else!!

No kidding, an entire flock of the Himalayan flew over their heads as they topped the trail and walked out to the lake. I am beside myself with envy! Here’s the picture of these “favored few!”