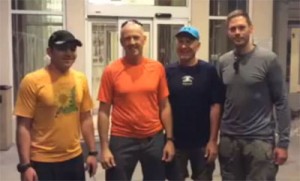 Ezra, (Spokane), Bob, (Seattle), Jim, (Chicago via Abu Dhabi), and Brent, (Seattle), ran the Ruby Crest Trail in the Rubies IN ONE DAY!

I picked them up that morning, June 25, 2:30 am at their hotel in Elko for the shuttle to the trailhead at Harrison Pass where they shouldered what looked to me to be pretty small backpacks for the run.

They’re old hands at traverse-running, though, so they knew what they were doing, adding the Ruby Crest Trail to their list.

The following day I received the report, “We completed the traverse yesterday. It ended up that there was virtually no snow at Overland but all sorts of problems by North Furlong and coming down from Liberty pass so it was messy, but a terrific hike!”

That’s what they said. One day over and it’s a hike!