You are here: Home / John's Journal / Glaser Ranch Cattle Round Up 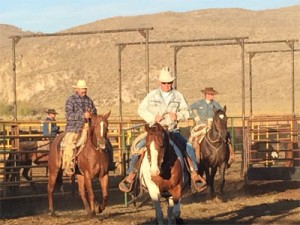 I once again became truly “Cowboy” John in late October of this year when Peter called asking for help at the Glaser ranch, east of Elko.

Glasers’ cattle had been on the range from spring through early fall and it was shipping time so Peter called.

The cattle were rounded up by me and two other buckaroos on horseback and moved into the pen. Then a select number were cut out by the cowboys and funneled down a lane to the scale where the Cattle Buyer weighed and cataloged each before loading them onto the truck for shipping.

Although I grew up in town (Elko, NV) I spent summers on a remote cattle ranch in northeastern Nevada. Cowboys on that ranch rode horses on the Diamond A desert between Nevada and Idaho to herd cattle, so I spent a good amount of time every summer horseback checking cattle. Working cattle from the back of a horse is what I love doing, so when local ranchers call for help I am ready to go! That’s where I prefer to be!