You are here: Home / Archives for Cowboy John 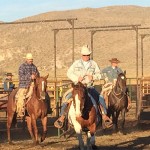 I once again became truly “Cowboy” John in late October of this year when Peter called asking for help at the Glaser ranch, east of Elko. Glasers’ cattle had been on the range from spring through early fall and it was shipping time so Peter called. The cattle were rounded up by me and two  [read more…]